The women’s marches, took place the day after the presidential inauguration. They occurred not only in the US, but throughout the world. There were a total of 673 women's marches worldwide with a total of 4,956,422 marchers. The official rally, and the one most heard about, was the Women’s March on Washington. I attended this rally in D.C. and was astounded by the amount of women  and men who came to make their voices heard. People of all ages and races came through the streets, wearing homemade knitted pink hats shaped with cat ears on top. The purpose of these hats was to “make a unique collective visual statement which will help activists be better heard.” 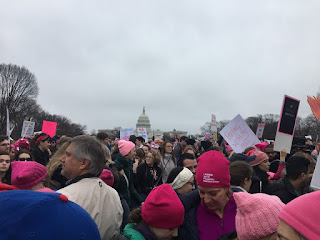 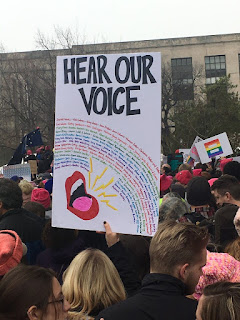 There I met a woman named Barbara Res who held a sign that said “I am the woman who built Trump tower.” Res worked as an executive for President Trump for 18 years and supervised construction of Trump tower in NYC. She explained how her experience working for him was well but that he changed over the years. She believes that the money and fame had gone to his head. Res said,  “He wants America to do well only because it will reflect on him.” She feels that, “he has neither the temperament or experience to be president…” I found it interesting to see a woman, who worked closely with Trump for years, remark that she’s seen such a major change in him; a change big enough for her to speak up and march along with all these people, despite working with him for so many years. 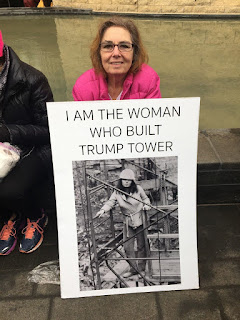 The motives of these millions who came to march were to express their support for women’s rights and their opposition to Donald Trump’s presidency. In my experience, it was not merely a march for the rights of women (which, as of now, they possess). It was, instead, a fire back at the disdainful rhetoric spewed from President Trump’s campaign. Marchers chanted, “We will not go away, welcome to your first day!” as they made their way through the streets of Washington. Many shameful remarks were made throughout the duration of the campaign, among other things Trump has been caught saying. These were remarks not only against women but against immigrants and people with disabilities. It is also known this new administration are not supporters of the LGBT community. Therefore, this march was a symbol of unity, a reminder that even if people attempt to pull us apart, we can persevere and work together. It was a message to this administration that we will stand for our reproductive rights as women, and stand for equality for all people, no matter what race, religion, or sexual orientation. It was a message to President Trump that we are not a country of hate and division but of peace and harmony. 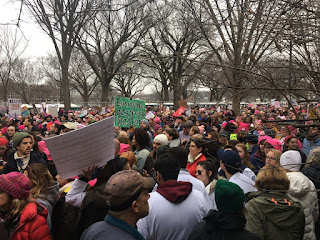 Posted by Patriot Press at 11:51 AM No comments:

Some Opinions About NWR Dress Code

North Warren has had a dress code for a long time even though some students have chosen not to follow it. No matter how we look at this situation there are two things when it comes down to this issue: one is fact and the other is opinion.


Being a student at North Warren has shown me that this school wants to do the best for its students. When it comes to the dress code, it’s important that every student is heard and that the student body has a voice in the process of altering the dress code regulations; especially because it's a touchy subject.

Yes, there are a lot of people who are pushing for a uniform and there a lot of reasons why there should be a uniform. On the flip side, North Warren is a public school, with students who love to express individualism. With uniforms, we all lose that privilege.

I know a lot of people who wear boots or lacrosse shorts, even really bright ones. If we have uniforms it will take away from students’ individually. It would also be nice to not have uniforms because we need to be teenagers; these are our last couple years before adulthood and we’re going to need to dress for work. Allow us to have our last years of individuality.
Posted by Patriot Press at 8:58 AM No comments:

On February 22nd, President Trump and his administration revoked the federal guideline  allowing transgender public school students to use the bathroom corresponding with their current identifying gender. The rollback came from the Federal Education and Justice departments.

In summary, the “Dear Colleague” letter to the Supreme Court, disregards previous gestures from the Obama administration to stand up for transgender student rights. These previous policies were put into effect because the administration felt that not allowing transgender adolescents to use restrooms correlating with their genders, could violate anti-discrimination laws.

In the letter, addressing America’s public schools, the reason given for removing this policy was because “it lacked extensive legal analysis, did not go through a public vetting process, and sowed confusion and drew legal challenges.” The letter adds that “schools must ensure that all students, including LGBT students, are able to learn and thrive in a safe environment.” The Trump administration prefers for this issue to be handled at a state and local level.

Recently, American citizens have displayed discontent with this new rollback. A large group of trans-activists gathered outside the White House, including high school transgender boy, Gavin Grimm. As protesters chanted “Save our schools, protect trans students,” Gavin took  a megaphone to speak to the crowd. Tearfully he spoke, with passion, declaring “No matter what happens, no one, not even the government, can defeat a community so full of life, color, diversity, and most importantly, love.”

Transgender people and supporters feel that the revoking of these guidelines is a response to fear, something the general public and the new administration in power just do not understand. A school forcing a trans student to use a bathroom that does not match his or her gender is a constant reminder that peers, school, and state/federal government does not accept or support the efforts of becoming his or her true self. Some argue that this is not a state’s issue, but a civil rights issue.

The supporters of this rollback claim that in this rescindment, bathrooms will become safer. People have claimed that men will pose as women, just to enter that bathroom and sexually assault others; and the same concept vice versa. Statements like these are frequently brought up, although having no evidence or incident to support the complaint. If there is a concern of sexual assault in bathrooms as a result of the transgender bathroom bill, I ask you to think of all the other places sexual assault occurs: alleys, clubs, basements, frat parties, the backseat of a car, behind a dumpster.

A story about a girl, Marilyn, in Texas was released, and it outlines her struggles regarding this new rollback. “Marilyn, who is transgender, was still presenting as a boy to her classmates, and everyday she would complain to her mother of the stomachaches and headaches - the stress of being someone she isn’t taking its toll.” Marilyn had been taken out of school at the start of her transition, but her mother, Chelsea had re-entered her, hoping that the atmosphere had changed. Unfortunately, it had not. “Chelsea claimed administrators told her that the district received a complaint about her daughter “every single day.” But it wasn’t nearly as bad as the bullying from other students.” Chelsea continued to tell of the awful treatment her daughter had endured claiming “a group of students cornered her daughter on the playground- telling her that she was a boy and that they would never call her Marilyn.” Children like Marilyn just want to go to school, use the bathroom, be accepted, and treated like they belong.

Whatever the reasons of support or opposition to this revokement, it is now up to the states to decide the future of their trans children and public bathrooms. And as people of this country, who long to see the ancient ideals of “life, liberty, and the pursuit of happiness” accomplished, let us all hope our state makes the right choice.

Posted by Patriot Press at 9:00 AM No comments:

Alice in Chains’ Dirt was released in 1992, at the height of Grunge music.  The song Would? was actually recorded before the rest of the album was even written.  It appeared in the 1992 movie Singles which revolved around the new era of 90’s Grunge.  Dirt, in comparison to the previous album Facelift, is a lot darker and more emotionally charged.  Dirt hit #6 on the Billboard 200.  Steve Huey of AllMusic called it, “...a primal, sickening howl from the depths of Layne Staley's heroin addiction, and one of the most harrowing concept albums ever recorded."  Although Dirt was released on the same day as another famous Grunge album, Core by Stone Temple Pilots, it pushed through, and went on to be “certified four times platinum status in the US, platinum status in Canada, and gold status in the UK.”

The album’s theme centers around Layne Staley’s battle with heroin addiction. This makes for meaningful, almost angry, gritty, and morbid lyrics which sent Grunge fans in a state of awe.  Although not all songs on the album contain messages about heroin, Jerry Cantrell’s contribution to the lyrics (on almost half the album), share the same theme. The lyrics showcase the mind of an addict; what grim, helpless thoughts race through their heads, and although they may be aware of their addiction, they feel they do not have the power to stop it (hence the lyrics on Down in a Hole: “Down in a hole, and I don’t know if I can be saved,” and why he is “feeling so small.”  Other tracks exhibit the grittiness of addiction (and grunge) as Staley and Cantrell focus on the not so “sad” part of it all as well as the angry side.  This can be seen on tracks like Junkhead, God Smack and Sickman.

Another interesting track which Cantrell wrote is Rooster. Rooster was written as an allegory to the life of a soldier in the Vietnam war.  The lyrics contain great imagery and a real sense of the thoughts and terrors of a soldier at war.  One line of the song says, “The bullet screams to me from somewhere,” which is a “poetic” way of describing the terrors of jungle warfare.  Another line I like is, “They spit on me in my homeland,” because it really emphasizes how Vietnam soldiers were treated so poorly after returning home from war.  The song showcases how horrific the conditions were fighting in Vietnam and how terribly the soldier missed his family (“Gloria sent me pictures of my boy”). Cantrell was inspired to write Rooster for his father, who served in the Vietnam war.  His father was nicknamed Rooster during his time serving which encouraged Cantrell to name the song that title.

Posted by Patriot Press at 8:49 AM No comments: